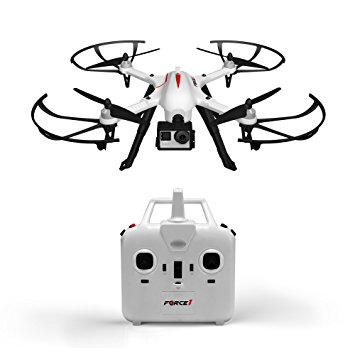 We bought this drone as a next step up from the multirotors you get at a toy store.
Overall I would say we are quite pleased with it, especially for the price ($150 on Amazon, but you can find for about $100 on eBay, which is what we did).
She has brushless motors, which is probably the key differentiating feature which graduates you up from the ToysRUs drones (which are great for kids to start with for sure).
We seem to be heading toward racing FPV drones eventually?(First Person View–racing drones where pilot only sees what the onboard drone camera sees) ?so I wanted something that?could use to get familiar with the power of racing drones (in other words: brushless motors).
The pro level FPV drones are seriously?fast (like 0-80 mph in 1 second and up to 120 mph) and are a completely different piloting experience since you can’t actually see the drone–only what it is seeing.
So we want to work up to that.
This F100 is perfect. It’s a “Line of Sight”(LOS) viewing experience (like most RC experiences where you are watching it fly around–not FPV).
The one thing we had a bit of trouble with was the unlocking feature. The F100 has a button on the transmitter (remote) ?you have to press to unlock the rotors. When you do it right, the rotors start spinning slightly to indicate they are ready for throttle.
But if you hold that same button (the red one) longer, it also turns off and ?locks the rotors (so it’s safe to approach and hold the drone). ?Seems to be a razor fine line between unlock and lock. And the instructions aren’t much help on this point.
Basically you want to press and hold for less than 2 seconds to unlock so you can fly.
If you still have trouble, make sure the joysticks are in their lowest/neutral position (particularly the throttle).
Otherwise the F100 is a blast. For the money I would?highly?recommend it. It includes a simple transmitter radio, which is great because I can see we are going to be getting into some money as we move into FPVs. The radios, FPV goggles and drones themselves are all “next level” (I spoke to one father-son team on the amateur racing circuit and they are investing about $7,000 per year into the sport. ?That’s nothing compared to something like moto-cross or equestrian sports, but still).
One step at a time.
I’ll be posting here about the next steps we plan to take as we go. So check in a week or so and I should have something up to help others ease into the FPV stuff. ?(Basically I “skull sucked” the aforementioned father-son team to learn about simulators, best radio transmitters and even an indoor drone which is perfect for indoor FPV flying [aww yeaaah].)
The big question with all this is: will Aren have as much fun at this sport as I’m about to?